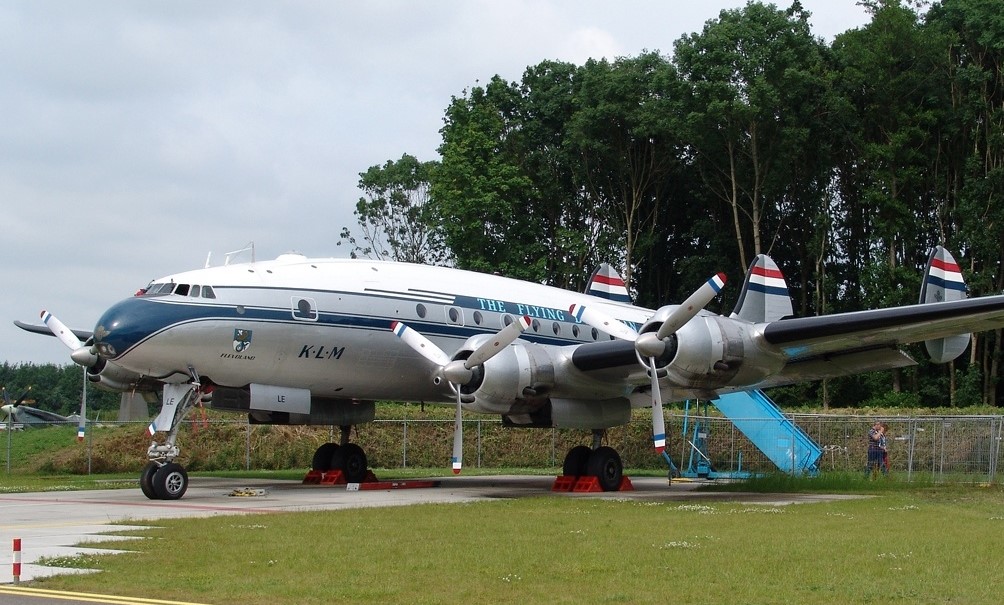 The aircraft was equipped with 46 seats in 12 rows with 2+2 seating each. According to his original boarding pass in the album, Mr Bertram was assigned seat L2, very close to the aircraft’s entrance in the very back. 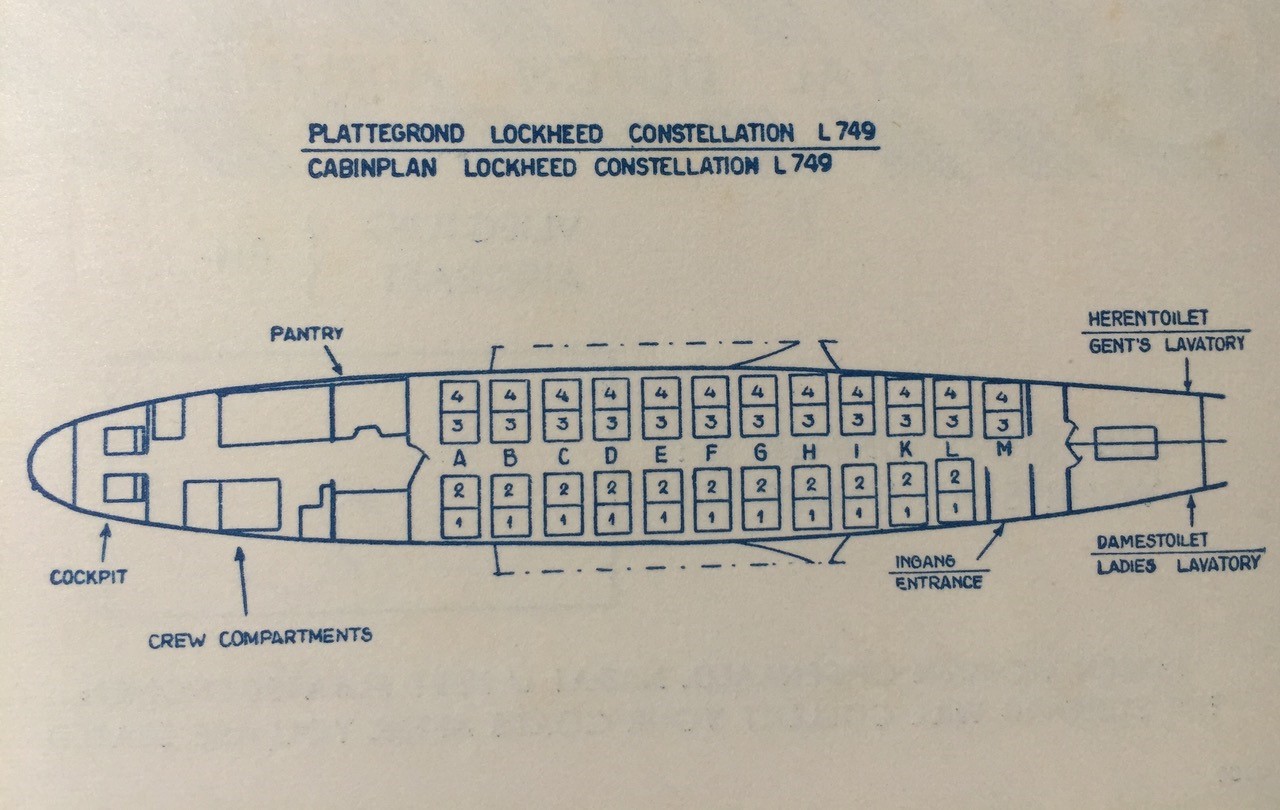 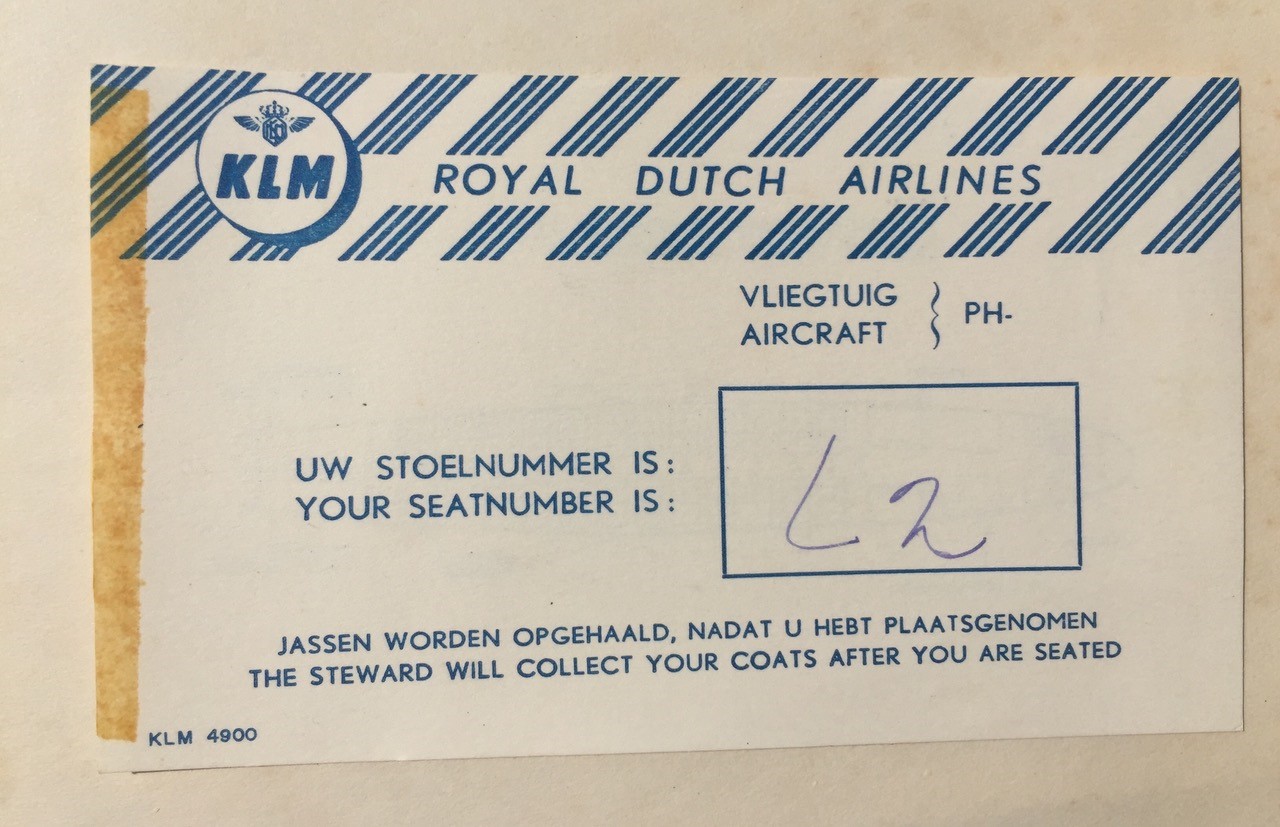 The first overnight leg was to Beyrouth overflying Liège in Belgium, Zurich and Rome, as the carbon-copied paper bulletin circulated in the cabin from the cockpit indicates, providing all necessary details about the flight from crew names to the distances between waypoints.

Passengers were fed well, including getting treated with lobster, as the menu card from the flight indicates, interestingly in French only, while all other printed communication took place in either English or German.

From Beyrouth, flight KL823 flew on to Karachi, Bangkok and Manila, where it arrived on Thursday, December 11th, 1952 at 4.20 pm local time, over 36 hours after leaving the Netherlands. 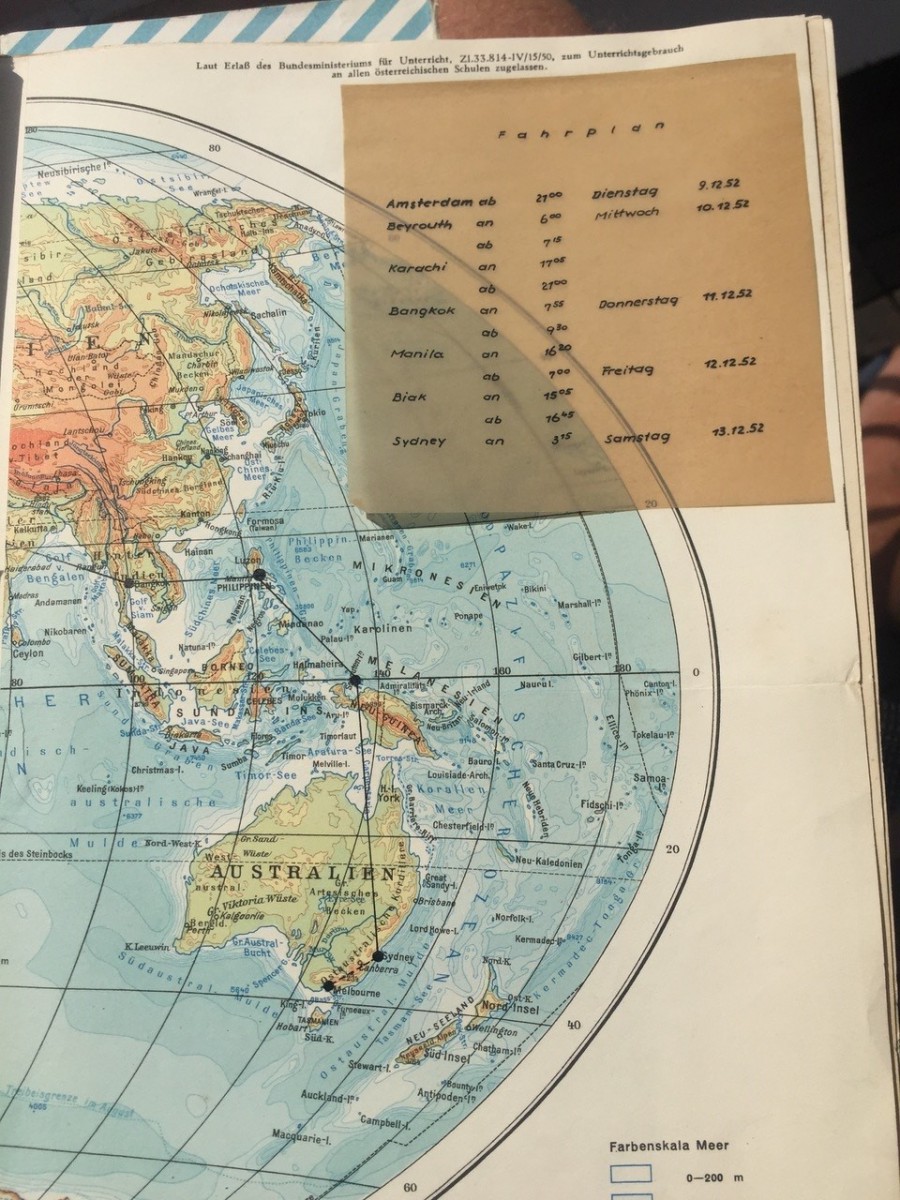 In the Philippine capital, passengers were regularly put up in a luxury hotel as part of the itinerary, after having spent two consecutive nights on the noisy and vibrating Constellation.

On Friday morning December 12th, 1952, the onward flight left early at 7 am local time to proceed to the next stop, Biak, now Indonesian Papua, then a Dutch overseas territory called Dutch New Guinea.

It would rise to tragic fame five years later when in July 1957, another KLM Constellation on the return flight from Australia crashed with 58 victims. On this trip, it was a happier stopover, as it was the last one before Sydney and located almost exactly on the equator, earning travellers the equator baptism. In this case in the form of a certificate mailed from Amsterdam after completion of the journey, equally included in the travel album. 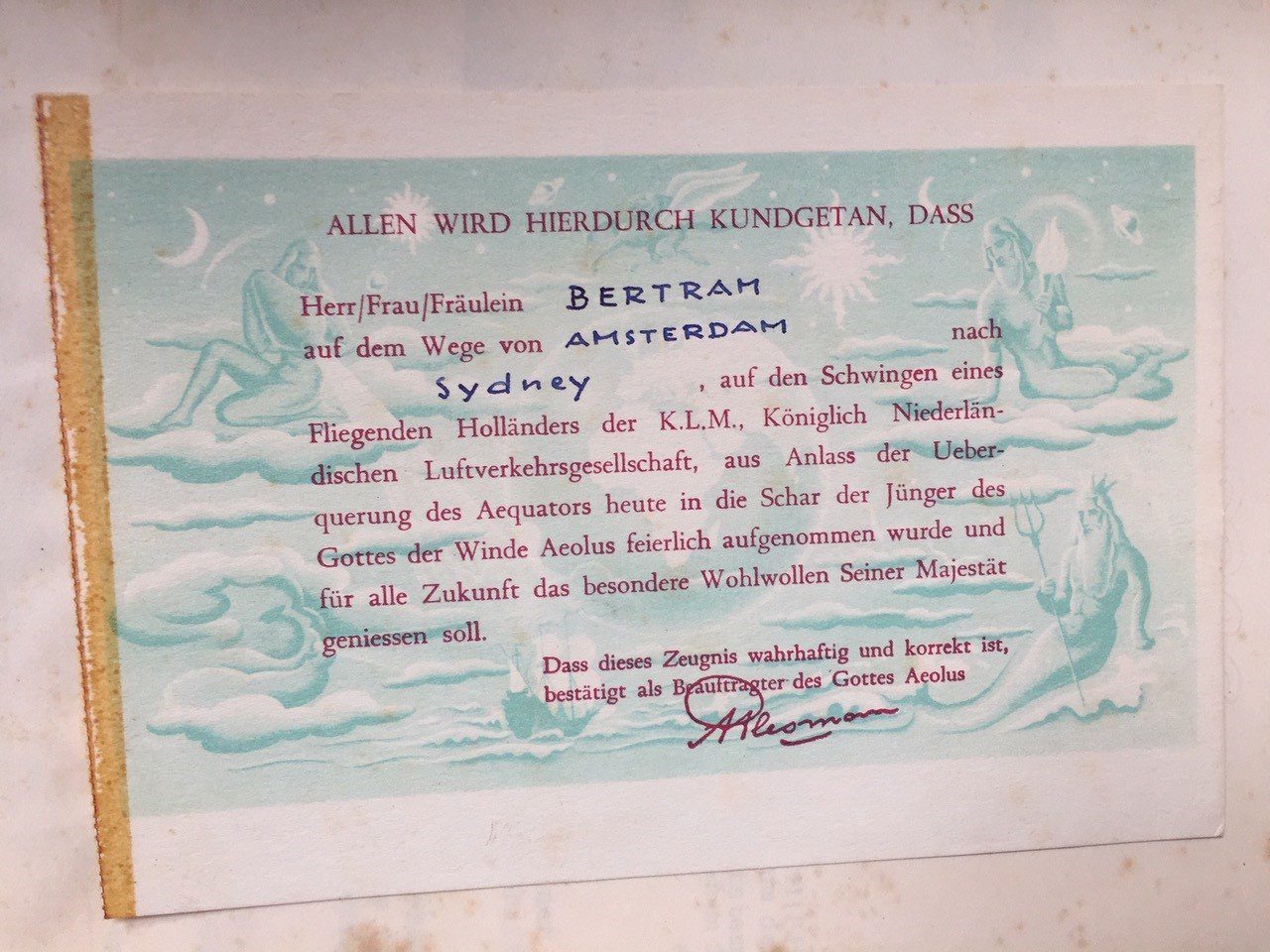 Then the Constellation took off for one more time in the afternoon local time, reaching Sydney Mascot Airport (in contrast to Rose Bay water airport, served by flying boats until 1955) at the ungodly hour of 3.15 am on Saturday, December 13th, 1952, after almost 70 hours underway. 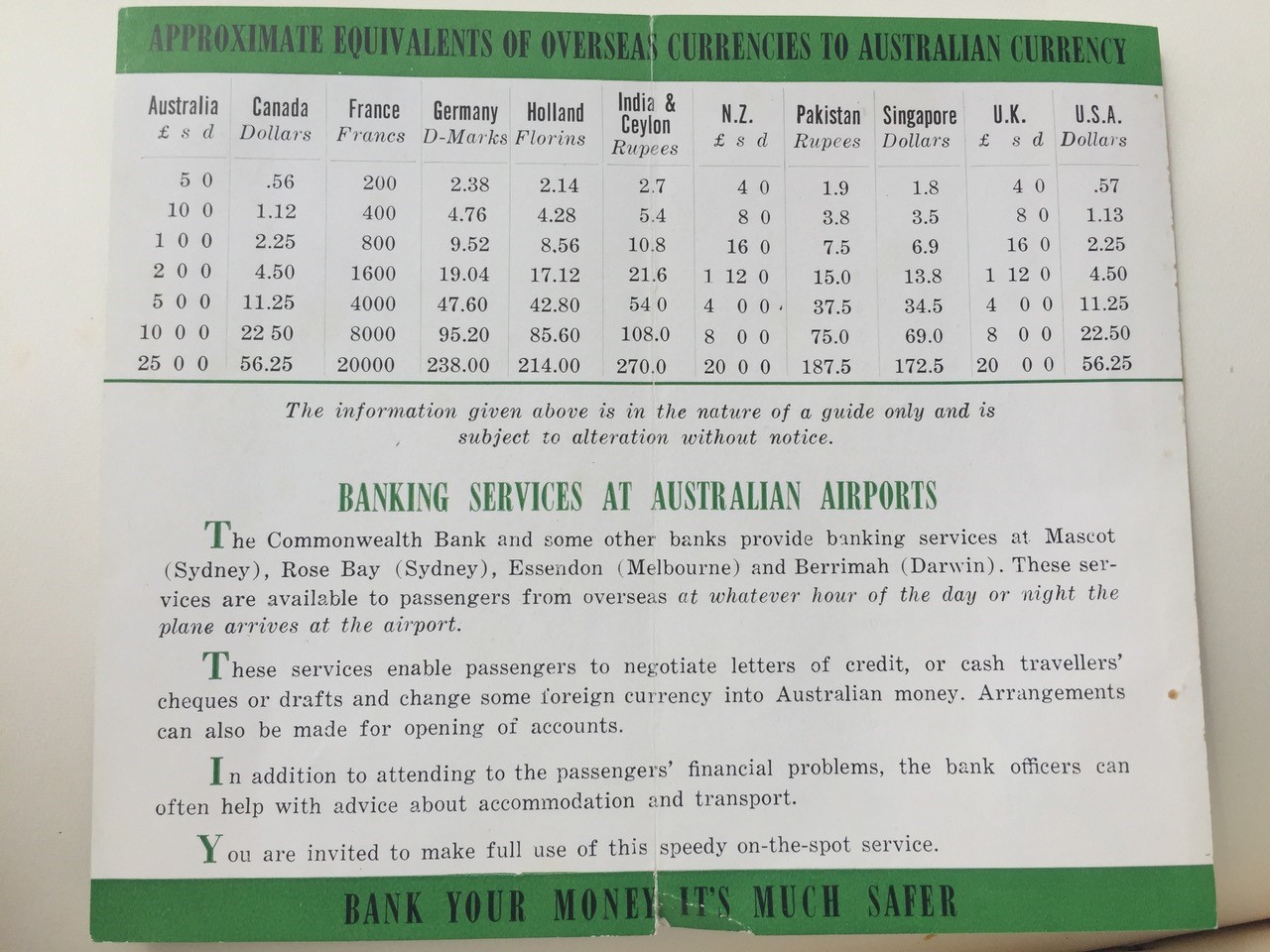 But Mr Bertram hadn’t reached his final destination yet, an Australian company representative met him to hand over some local cash for initial incidentals (probably impossible to obtain in Europe at the time). And also his domestic ticket on Australian National Airways (merged into Ansett in 1957) to Melbourne that same morning, probably on a DC-4, costing Australian £9 and 70 shillings, the equivalent of about A$470 today. 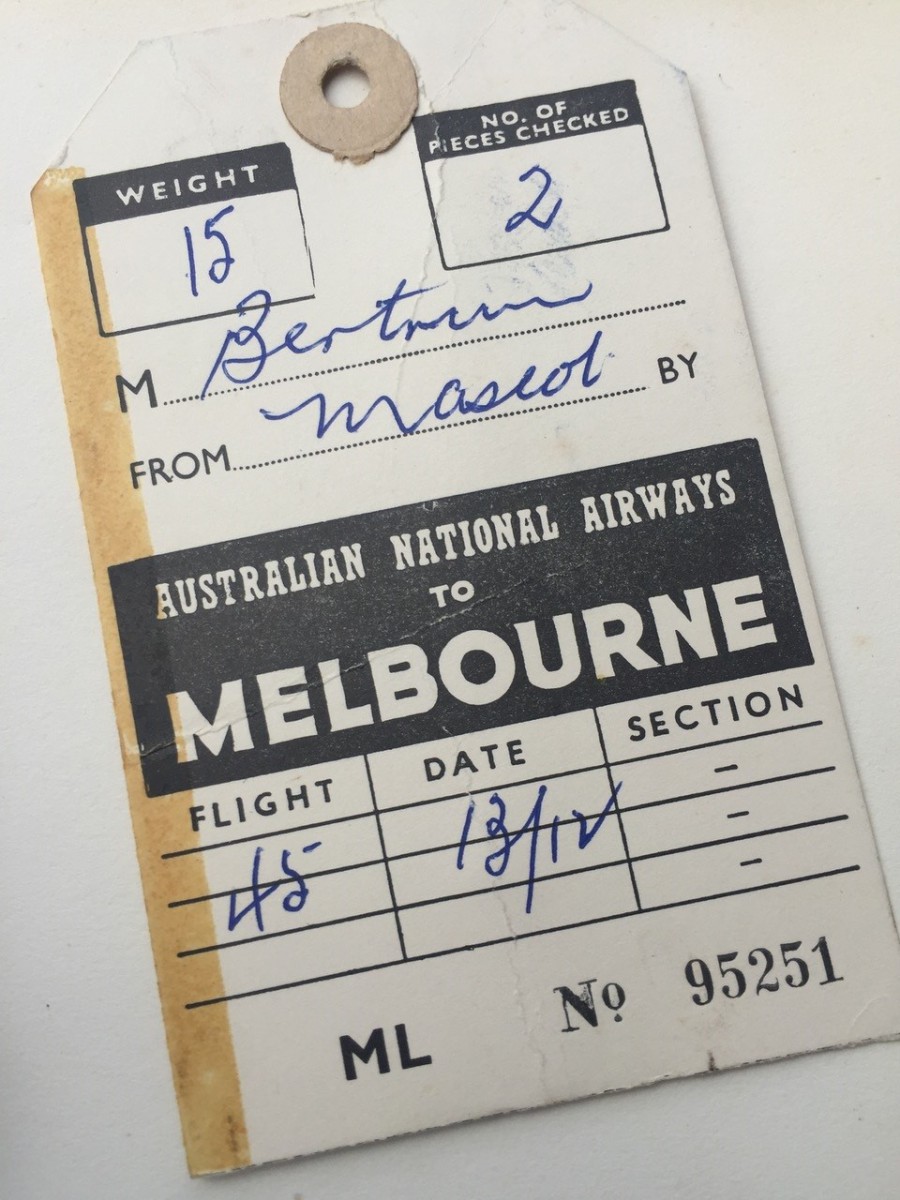 Arriving at Essendon Airport, he was met by a driver to take him to his new temporary home in Geelong southwest of Melbourne. But unfortunately, he wasn’t rejoined by his checked bag on arrival, which according to the correspondence in the album only arrived in Sydney on December 16th and didn’t seem to have reached Melbourne by December 22nd, 1952 even. 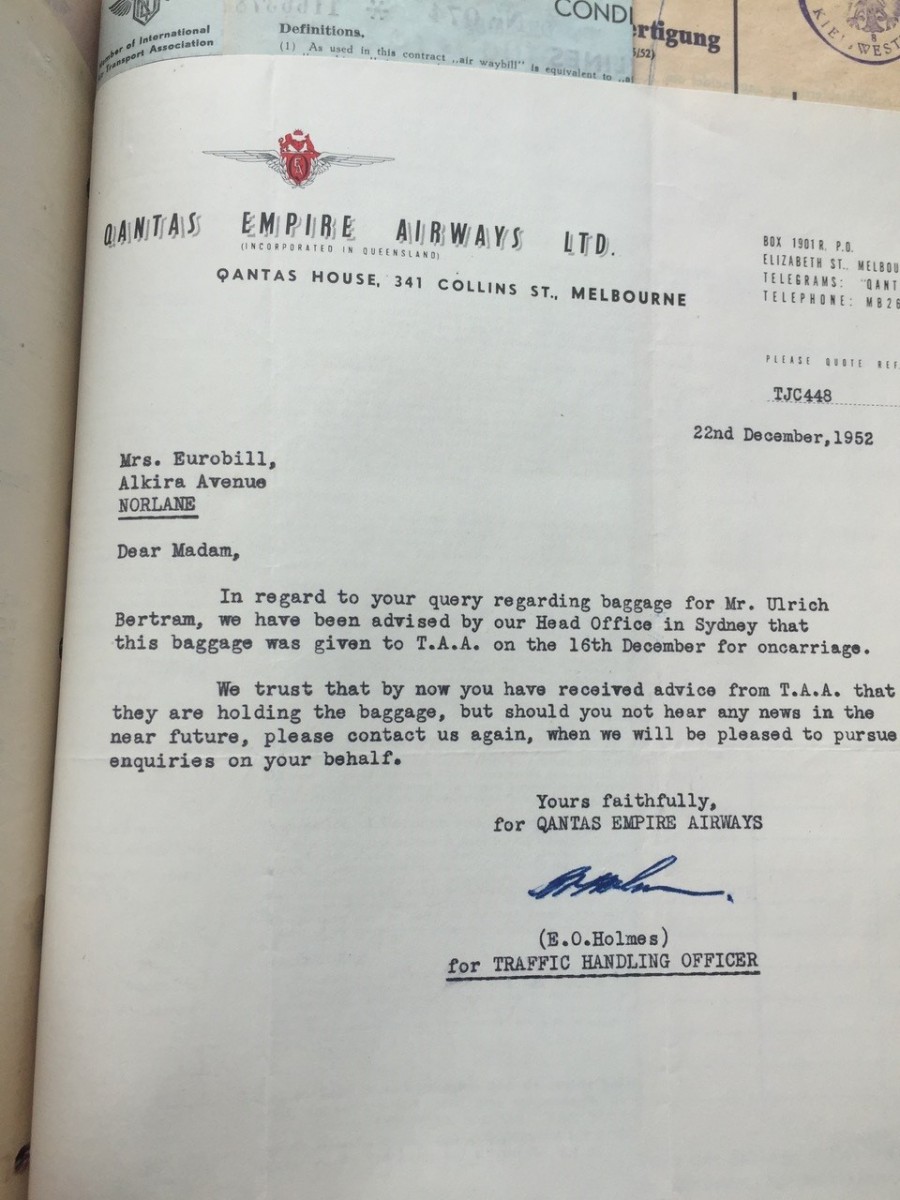 As stark as the contrast, especially of the journey’s duration might be, compared to flying today, some hassles of air travel rarely seem to change, ever. 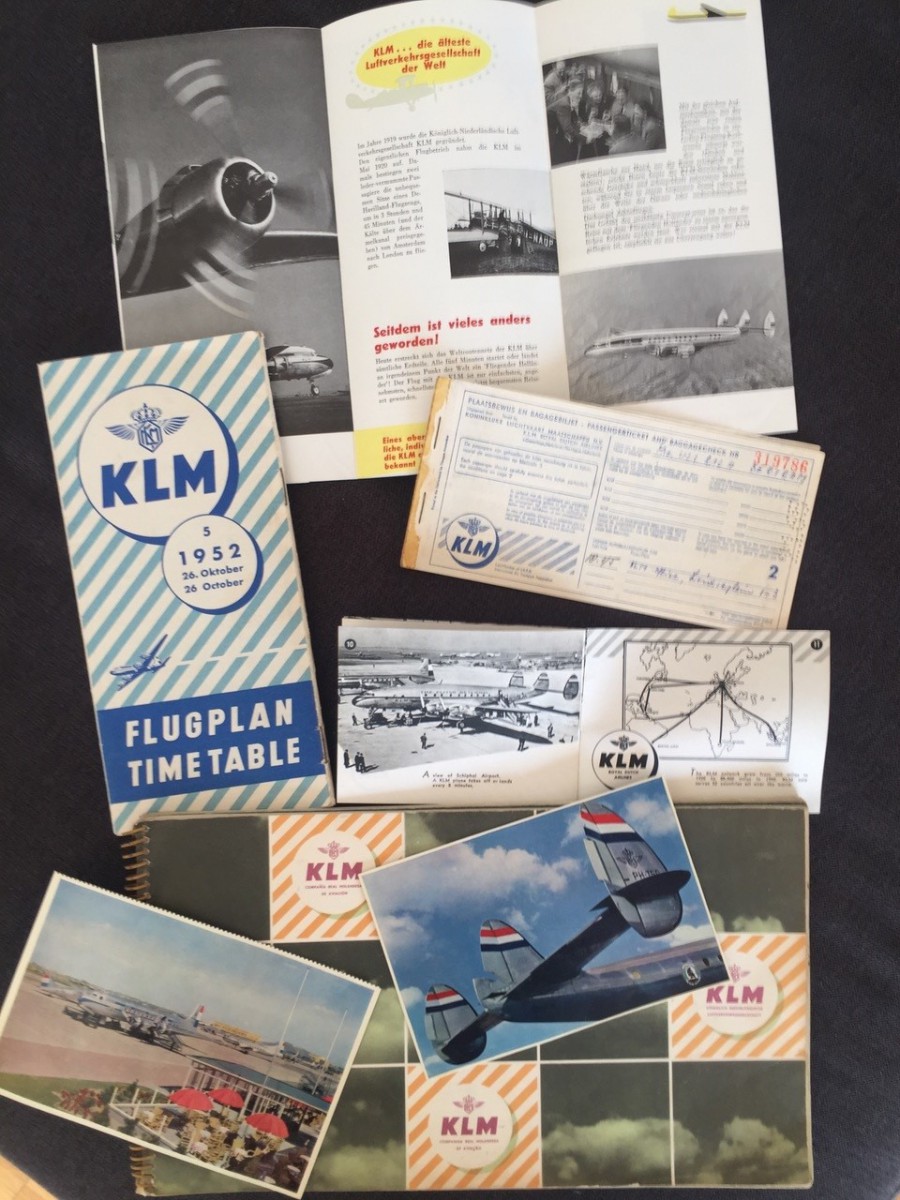 Almost 70 years ago, travelling from Amsterdam to Sydney by KLM was an epic journey.

Travelling by air over such a vast distance was anything but the norm – especially in terms of fares. All the fascinating details of a trip by air on KLM in December 1952 from Amsterdam to Sydney and on to Melbourne have recently come to light.

Meticulously archived in an incredible, hand-made travel album documenting this journey, found on a flea market in Hamburg, Germany, – by the author – for a mere €10 from a vendor who had no idea about this treasure.