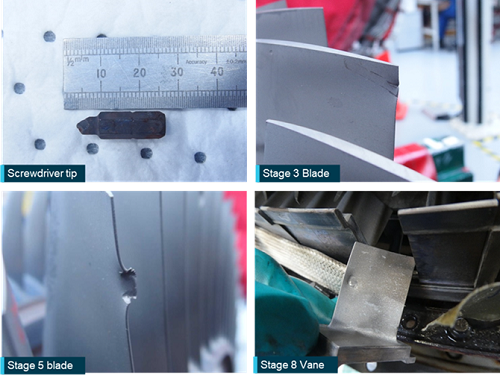 The small screwdriver tip and some of the damage it caused. Photo: ATSB

After the aircraft safely taxied back to the gate, engineers reported finding metallic debris in the tailpipe of the aircraft’s right engine.

They discovered the engine’s high-pressure compressor had sustained significant damage and a removable screwdriver tip was found in the engine’s combustion section.

“The ATSB concluded the tool bit had been left in the engine after maintenance and when the engine was running, it entered the high-pressure compressor, leaving dents and nicks in numerous rotor blades and stator vanes,” said ATSB Director Transport Safety Stuart Macleod.

“At least two of these dents and nicks initiated fatigue cracks, which developed during the aircraft’s subsequent operation, and led to a blade failing during the incident flight’s take-off roll.”

“The liberated blade then caused greater damage to the engine’s high-pressure compressor, and the engine surged, resulting in the loss of power and the low-speed rejected take-off.”

McLeod said tool control was an important part of aircraft maintenance and small, seemingly insignificant components could, and had, caused significant damage.

He said the incident was also a good example of why flight crews needed to be aware that noise and vibration from an actual engine failure could be different from that experienced during simulator training.

“High-fidelity training devices like full-motion flight simulators aim to maximize the realism of an artificial environment, but there is a limit to their ability to replicate extreme events,” he said.

The incident prompted Jetstar to issue a safety alert to its maintenance engineers highlighting the need for all tooling to be accounted for and it also conducted an assessment of ongoing risk.

A small screwdriver tip that rattled around a Jetstar Airbus A320 engine for more than 100 flights caused a blade failure and a rejected takeoff as the plane veered to one side.

The October 2020  flight was taking off from Brisbane Airport on a scheduled passenger flight to Cairns when the crew felt a vibration and heard a popping noise.

As the vibration grew faster and louder, the aircraft veered to the right of the runway despite the fact the first officer applied full left rudder pedal.