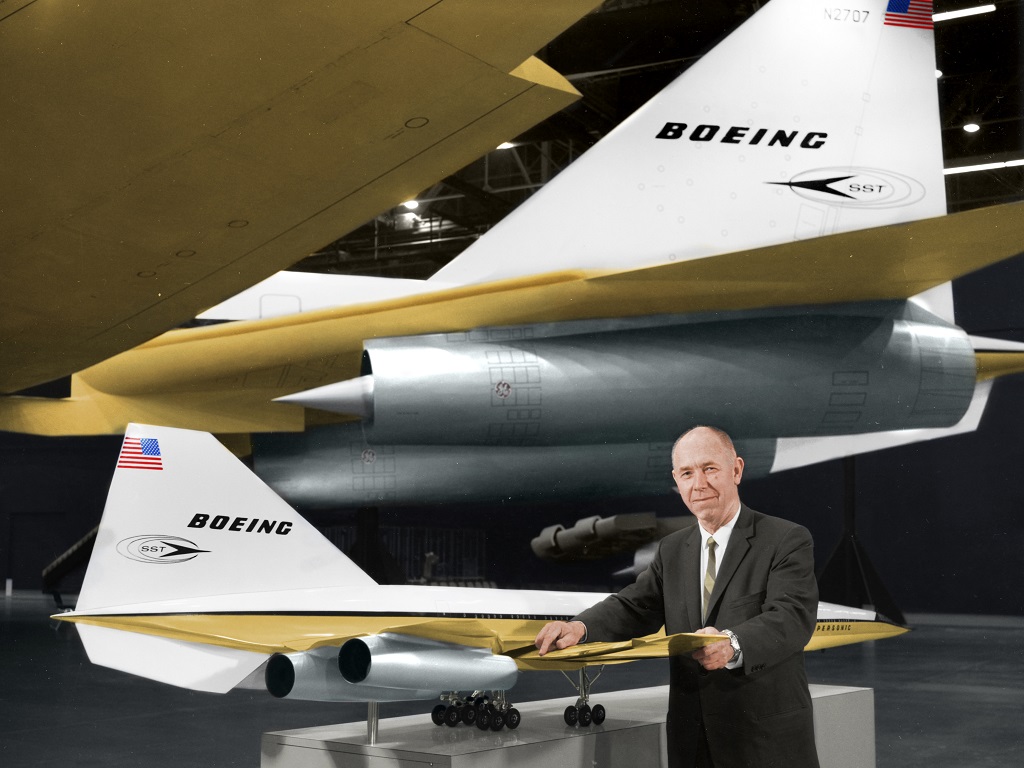 Maynard Pennell chief designer of the B2707 with the mockup. Boeing Historical Archives photo colorized by Benoit Vienne

Despite doubts, and because Pan American World Airways ordered six Anglo / French Concordes in 1963, President John F Kennedy launched the US counter to the Concorde, essentially on national pride.

The US Federal Aviation Administration (FAA) called for tenders from the US industry to build an aircraft superior to the Concorde.

Boeing which took a high-risk technology road with a radical swing-wing submission won the competition in December 1966 by claiming its SST design would have seat mile costs below those of the 707.

Boeing was to build two prototypes over four years at a cost of $1.44 billion in 1967 dollars or $35 billion today!

Twenty-six airlines took 122 delivery positions with Pan Am, TWA and Alitalia to be among the first to fly the jet.

The Boeing design was an extraordinary gamble based almost solely on the American “can do” attitude.

Because the B2707 was to fly at Mach 2.7 (1,800mph or 2,898km/h) it would have to be built entirely from stainless steel and titanium materials that were thought to be difficult to work with at the time.

But as work progressed, it became evident that the swing-wing design was flawed meaning the Boeing 2707 would be able to carry virtually no payload.

Also, the level of noise it produced together with the sonic boom, were now insurmountable difficulties.

Boeing scrapped the swing-wing in October 1968 in favor of a fixed delta-wing design but as construction proceeded with the mock-up, the aircraft ran into another obstacle much greater than the sound barrier — the cost hurdle.

Congress was now deeply worried at both the rising cost of the 2707 project and growing public disquiet — led by the famous Charles Lindbergh — over its engine noise and sonic boom.

Finally, environmental concerns and critics of government spending won the day and in March 1971, the US Senate and the House of Representatives voted to kill the project. At the time, the US investment in the B2707 was $1 billion (1971 dollars).

The B2707, together with the Concorde, was a watershed in commercial aviation. It was the first time that environmental concerns sounded the death knell of a project.

At the same time, airline concerns over operating costs of aircraft had also become significant, flagging that the future in aviation was more than ever to be focused on reducing the cost of flying and flying’s effect on the environment.

Despite the host of problems associated with supersonic travel, serious studies continued as aircraft manufacturers searched for answers on how to break the environmental and economic barriers of supersonic flight.

During the mid-1990s, Boeing teamed with McDonnell Douglas, Pratt & Whitney and General Electric in a $1.3 billion NASA-funded study into a High-Speed Civil Transport (HSCT).

But the challenge of designing an aircraft that would carry three times the payload of the Concorde double the distance without hiking standard ticket prices and not affecting the environment proved impossible and the project was dropped.

In the 1960s the Boeing 2707 supersonic transport was to be the future of air travel but it turned out to be a billion-dollar white elephant despite the best efforts of Boeing, the world’s largest aerospace manufacturer.

Now AirlineRatings.com can open its unique archives to let you take a peek at the development of the original B2707 prototype, the cabin and the men behind it.